Together with rain showers, the LED color shower heads are also 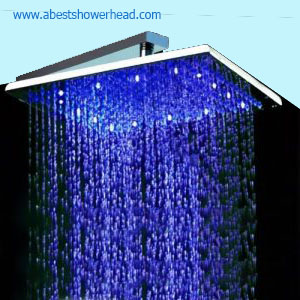 one of the trendiest items available on the market at the moment. The rain shower gives you a sense of tranquility and relaxation, the real feeling of being under a rainfall outside. Imagine all this comfort combined with some colors! It’s time to upgrade your shower time right now!

Forget about batteries, most LED showers are usually powered by running water. The water runs through a turbine creating energy enough to light up the LEDs. This feature can consume a lot of energy, so we advise you to stay away from batteries powered showers, avoid the hassle of changing batteries after few weeks. LED color changing showers contain all the characteristics as normal shower heads and you can often find them combined with rainfall shower options, for example.

Despite of what some people may think, it’s good to hightlight that LED showers heads are not dangerous at all. The power fabricated in these shower heads is extremely low, so the possibility of suffering an electric shock is basically nill. You are safe and sound under this colorful water!

One of the LED color shower head combined with the rainfall feature available on Amazon is the Rozin 20 Inch Stainless Steel Shower Head LED Changing Color Rainfall Top Sprayer. This shower head by Rozin is offered in several different sizes, such as 8-inch, 10-inch, 12×12 inches, 16-inch and a 20-inch for a large water coverage and perfectly fit your bathroom size.

The Rozin shower head with LED color runs through water flow whenever there is water running, therefore no battery is needed. The colors change according to the water’s temperature. The usual setting goes like this : blue for cold water, green for moderate temperature and hot water and flashing red for very hot water. A LED color change shower head could warn you about an extremely hot temperature water and prevent you from going into a burning hot shower

Another advantage of Rozin shower head with LED color is how easy it is to install and use, you get a complete kit with all the ceiling mount accessories. With an unique design, this model from Rozin is built with stainless steel and brushed nickel and it weights 18.2 pounds. Its user’s reviews on Amazon are outstanding with 4 stars ratings.

Have a nice colorful shower!