There are several factors that contribute to the suitability of a reptile species for the beginning hobbyist. The first is ease of maintenance. All reptiles require attentive care, but some species are easier to maintain than others. The easier to maintain species are tolerant of a wide variety of environmental conditions, and are naturally hardy. Other important factors to consider are size, the easiest reptiles to care for are small or moderately sized species. Docility is important if one desires to handle the animal on a limited basis. No reptile likes to handled excessively, but some are much more tolerant of handling than others. This seems to be a particular issue with reptile pets for younger children, as they have a tendency to handle animals excessively if not monitored.

Feeding vigor is important in beginning reptile species, the easiest species are the most voracious feeders. Price is often an issue, although some of the least expensive reptile species on the market are also the least suitable for beginning reptile hobbyists, such as the green iguana (iguana iguana). Overall, the most suitable reptile species for beginners are moderately sized and priced, captive born, tolerate a wide variety of environmental conditions, tolerate some handling, are voracious feeders, and for the beginning herpetoculturist, are easy to breed.

Beginning hobbyists are faced with many commonly available choices for their first reptile pet. It is important to educate yourself about the needs of any reptile before bringing it home, even it has been billed as an “easy to care for pet”. Reptiles as a group are much more demanding in their environmental and dietary requirements than other types of pets.

Many people (especially parents of a reptile obsessed child) do not fully understand what they are getting themselves into when they purchase a $10 iguana or a $5 anole, and as such their first experience with the hobby of reptile keeping can be very negative. It is important to inform new hobbyists of their best choices, a positive experience with reptile keeping can entice the entire family into a wonderfully satisfying and educational hobby.

With all of the reptile species available today has come some misconceptions about which reptiles are best for beginning hobbyists. The cheapest species are very often not the easiest or most suitable for the beginner. Several species have in fact, been traditionally sold as “starter” reptile pets, when in fact, they are far from suitable. Many of these “starter” reptile species should only be kept by experienced herpetocultuists.
Best kind of reptile pet?

Just with the best reptile species, there are several factors that contribute to making a reptile the “worst” species for beginners. Aggressive reptile species should not be kept by beginning hobbyists, these animals can be difficult to handle and can cause injury to an inexperienced keeper. Reptile species that are heavily parasitized, as is the case with the majority of imported species, are difficult to maintain for the beginner and should be avoided.

Large species that are potentially dangerous, or that are expensive to feed, house, and maintain should be left to experienced keepers. Reptiles that require demanding environmental conditions, or reptiles that stress in captivity easily are difficult to maintain for everyone, not just beginners. Unfortunately, there is rather a long list of difficult reptile species, but it is important to know which commonly seen species to avoid.

With so many reptile choices on the market today, it is sometimes difficult for a beginning hobbyist to choose an appropriate reptile pet. There are many reptile species that are wonderful for beginners, but there are many commonly available and cheap species that are not. It is important that beginning hobbyists have good experiences with the reptiles they choose to purchase, as this encourages them to become more involved in a fascinating hobby that will last a lifetime.

The corn snake (Elaphe guttata), or red rat snake, is a North American species of rat snake that subdue their small prey with constriction. The name “corn snake” comes from the fact that they have a maize-like pattern on their bellies and because they were found in corn fields. Corn snakes are found throughout the southeastern and central United States. Their docile nature, reluctance to bite, moderate adult size 1.2–1.8 metres (3.9–5.9 ft), attractive pattern, and comparatively simple care make them popular pet snakes. In the wild, they usually live around 15–20 years, but may live as long as 23 years in captivity. Like most rat snakes, corn snakes are non-venomous. 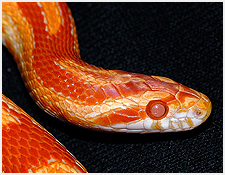 Corn Snakes have a diet primarily consisting of rodents, mostly mice and rats. Prey is killed by constriction. They are proficient climbers and may scale trees in search of birds and bats. As litters of infant mice are difficult to find in nature, many neonate Corn Snakes are known to eat small lizards as their first meals, and anoles are the preferred choice. Some individuals retain these dietary tendencies well into adulthood.

Corn Snakes are usually fed by their owners on a diet of commercially available rodents, predominantly mice, while younger and smaller specimens may eat live or dead rat or mouse pups of various sizes. Frozen mice that have been thawed to room temperature are usually preferred, as live prey can possibly carry disease or injure the snake if it has not been raised on live prey.

The Corn Snake was one of the first snakes to be kept in captivity by people, and remains one of the most popular. Large numbers are bred annually to ensure that there is a large captive-bred population, lowering the need to collect specimens from the wild. Cohabitation is discouraged in captivity, as these are naturally solitary animals.
A hatchling Corn Snake being handled

Hatchling Corn Snakes are often kept in a 5–10 gallon (19–38 L) aquarium or similar-sized plastic tub. As the snake grows, it requires more space. The minimum recommended size of housing for an adult is a 20 gallon (76 liter) tank. A 40 gallon (152 L) is a good recommended size and will provide the adult snake room to move. Corn Snakes become stressed in too large a cage with no hiding places. It is a good idea to use plants and many hiding spots in a large tank so that the snake will feel secure.

Since Corn Snakes, like all reptiles, cannot regulate their internal body heat, proper external heating is necessary for their health. A heat gradient from 70–75 °F (21–24 °C) on one end of the housing to 80–85 °F (26–29 °C) on the other is thought optimal to allow the snake to regulate its body temperature by moving from one part of the housing to the other, as necessary. Insufficient heat available in an enclosure at any point may lead to poor digestion, respiratory infections, and death, while excessive heat which the animal cannot escape, can cause neurological damage. Heat may be provided by a number of measures, including an under-tank heating pad (use at one end of the tank only), or one or more heat lamp(s), which should be attached to a thermostat to control temperature. Ceramic heat emitters may also be used in place of light bulbs, but if heat sources are not placed asymmetically, one part of the tank does not remain available for the animal to escape heaters.

Aspen or cypress shavings are often used to make bedding substrate, allowing the snake to burrow. Reptile carpet, newspaper, or paper towels also work. Cedar is toxic, so wood shavings containing cedar should be avoided. Feces are usually removed by spot cleaning, and periodically the tank is washed, disinfected, and bedding is replaced.

Additionally, the snake’s living area may occasionally need to be misted if the climate is very dry. This process generally occurs monthly for baby snakes, and 3–4 times per year for adults. This shedding cycle is necessary so the snake can have proper circulation. The cycle starts with a dulling of the overall color and loosening of the snake’s skin. Then the eyes turn a milky-blue color temporarily. When the eye color becomes normal again, this indicates that the actual shedding of the skin will occur within the next few days. To ensure proper shedding, one should frequently mist the tank with distilled water, or for extra help, place the snake on damp newspaper. If the snake’s skin comes off all in one piece, then this shows that they have received enough moisture. If not, one must manually remove the excess pieces of skin, especially around the eyes and tip of the tail, to prevent blindness and poor circulation.

Juveniles may be fed newborn mice every 5–7 days. Adults do well on one large mouse every two weeks but may be fed weekly. A general rule for food size is that up to 1½ the snake’s body girth is acceptable. Corn snakes also readily take a larger number of smaller meals, and a 50 centimetres (20 in) Corn Snake has been observed to swallow up to seven smaller-size “pinkie” rodent pups (less than the snake’s girth), in rapid succession, in a span of less than five minutes. Thus, as a Corn Snake grows, smaller food items are not necessarily outgrown.

As a matter of good practice, feeding of large prey and handling should be separated as much as possible in snakes. Rapidity of feeding is facilitated if the snake is handled minimally so as not to be upset, before being transferred to the feeding container. After a snake swallows, its prey must pass its thorax and lung, along to its stomach in the mid-portion of its body (ordinarily less than a minute). Handling is avoided while this happens. After feeding and swallowing has been completed, all but minimal handling is avoided to ensure proper digestion. This is usually a full 48 hours or until no lump can be seen in the snake’s belly.

If substrates such as aspen or cypress mulch are used, the snake should be fed in a separate empty container, to prevent ingestion of chunks of substrate, which may lead to internal injury. Snakes do not require live prey, and many corn snakes feed readily on pre-killed rodents which can be purchased as frozen from commercial suppliers, then completely thawed in warm water prior to feeding. The food is not required to be warm (above room temperature) for the snake to eat it, but it must be completely thawed. Feeding corn snakes thawed mice or small reptiles greatly reduces the chance of parasitic infections and disease, and also kills many of the pathogens these creatures may have once carried. Feeding snakes thawed mice or small reptiles in a separate container also can cause snakes to be more docile in nature, and as a result can usually be handled with ease. Feeding frozen rodents also completely eliminates the risk of the snake being injured during feeding, which can happen if the prey has not been constricted for a sufficient length of time or if it prey bites or scratches the snake.

Non-feeders, snakes that have refused to feed more than twice, can be enticed into feeding by having the prey item slightly warmed, either by a heat lamp or soaked in water warm to the touch a few minutes before feeding. Microwaving prey items is not advisable as they can explode. Another technique is called “braining”, where the skull of the prey item is punctured with a very clean needle and liquid from the skull exposed with forceps or tweezers. The smell of the liquid causes most snakes to feed.

Corn Snakes need a water dish and ideally will have access to clean water at all times. Corn Snakes swim well but generally do not seek water to swim in, but may well be found sitting in the water bowl. Corn snakes drink by dipping the end of their snouts in water and sucking up fluid with their cheeks. They need water every day although most people probably will not see the snake drinking.