When it comes to our cherished symbols of Christmas, few towering, twinkling firs can rival Rockefeller Center’s yearly display of New York yuletide cheer. But some of them succeed, at least when it comes to height: America’s tallest Christmas trees can top 100 feet. And they make for fun stopovers during the holiday travel season.

Only the biggest cities can afford to transport and maintain these giant firs, but size isn’t really the point. Tree lightings represent “a moment of togetherness and true unity,” says Alexandra Lewis, author of The Rockefeller Center Christmas Tree, “a moment in which hope and happiness win out over bitterness or worry, when togetherness wins out over partisanship.” 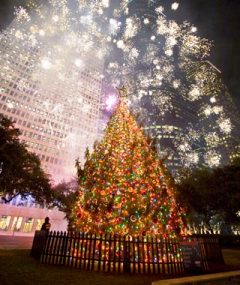 Every holiday season, Houston unveils the Lone Star State’s tallest Christmas tree in front of City Hall. This year, the Mayor’s Holiday Celebration tree is a 70-foot white fir, sourced from a snowcapped mountainside north of Medford, OR. It’s believed that trees grow better in this particular area due to superior soil quality, better exposure to sunlight, and more moisture. At this year’s celebration, Santa and Mayor Annise Parker will turn on the lights together. 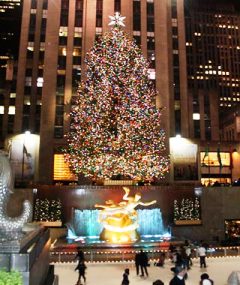 When it comes to iconic status, Rockefeller Center’s Christmas tree—usually a Norway spruce—has no rival. (Well, except for the White House’s smaller National Christmas Tree, which has more glitz than girth.) Its size is in full accordance with its fame. Chosen trees must be at least 65 feet tall and 35 feet wide. Though recent years have seen 100-footers, this year’s unofficial national tree is “just” 74 feet tall. Still, it’s one of the country’s most cherished symbols of the season. 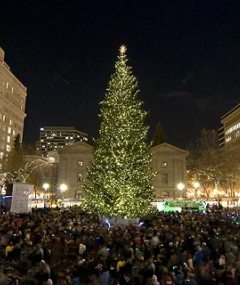 Oregonians found their state’s Christmas tree the subject of national headlines when an area teen was arrested for allegedly planning to detonate a car bomb during the popular lighting ceremony. Fortunately, the celebration went off as planned, and their towering 75-foot-tall Douglas fir now shines brightly in Pioneer Square. This year’s tree was grown in nearby Gaston, OR, and is the eighth donation from Stimson, a locally owned lumber company. 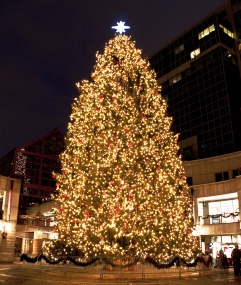 Since the 1940s, Bostonians have gathered on the Boston Common to watch the mayor flip on the seasonal lights. But the tree lighting actually takes place a sleigh’s ride away, in front of Faneuil Hall Marketplace. This year, revelers will be treated to a gigantic 85-foot-tall tree—plus bell-ringers, the Boston Symphony Orchestra, and a cappella choirs. Taken together, Faneuil Hall and the nearby Common will brighten Beantown with more than one million seasonal lights. 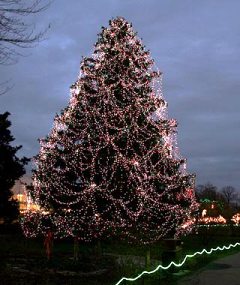 For 25 years, the Toledo Zoo has hosted the city’s biggest holiday party, Lights Before Christmas. Not only is their resident Norway spruce taller than Rockefeller Center’s, it’s decorated with more lights: some 35,000. To encourage energy conservation, the zoo is using LED lights. They’ve also rigged two bicycles to the energy grid, allowing visitors to help light the grounds using pedal power. With 120,000 visitors expected, they shouldn’t have any problem keeping the lights on. 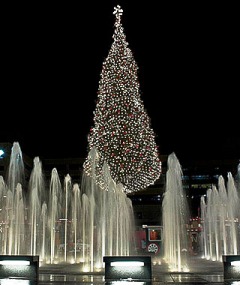 In many cities, the town’s tallest Christmas tree is bought, decorated, and hosted by a local business—often a shopping mall. In Kansas City, mayor Mark Funkhouser takes pride in being responsible for the tree that bears his office’s name. “No other city does it the way we do it,” he said after flipping the switch on for 7,200 lights covering the Mayor’s Christmas Tree, a 100-foot Douglas fir. “At moments like that, I feel very proud to be the mayor of Kansas City.”

The Americana at Brand & the Grove at Farmers Market
Height: 100 feet (each) 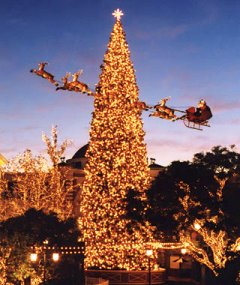 Los Angeles will never have a white Christmas, but that’s not stopping Angelenos from showing off the country’s tallest pair of cut trees. Yes, two. This year, a pair of majestic 100-foot-tall white firs were trucked down from northern California’s Mount Shasta and adorned with 10,000 lights and 15,000 decorations—apiece, that is. One goes up at the Grove at Farmers Market near West Hollywood, the other in nearby Glendale. 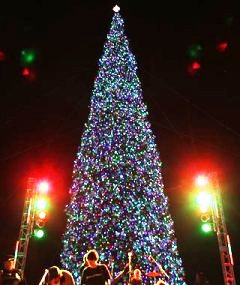 That’s right—the country’s tallest cut Christmas tree isn’t found in New York City, D.C., or Chicago. This year, it’ll be standing in the suburb of Anthem, just north of Phoenix. The 110-foot white fir—imported from California—is decorated with two miles of lights and more than 3,000 ornaments. It took 14 workers to put this massive evergreen in place. Now through Christmas, Santa will greet visitors at his cottage next to the tree. 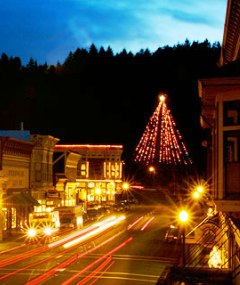 Year-round, the self-described “Victorian Village” of Ferndale, CA, looks like it was lifted from a Norman Rockwell painting. This hamlet in Humboldt County, near the state’s famous Redwoods, is prized by film directors for its well-preserved 19th-century architecture. Every winter since 1934, the fire department has decorated the spruce that grows at the end of Main Street. Can’t get there this season? There’s always next year. As an historical landmark, the town isn’t looking to change its traditions anytime soon.

Alas, neither Rockefeller Center nor Washington, D.C. can lay claim to America’s tallest Christmas tree. Rather, a little-known resort in Idaho called Coeur d’Alene has those bragging rights. At a whopping 161 feet, this record-holding grand fir is the tallest living Christmas tree in America. It’s so huge that the star on top is itself 10 feet tall. That’s bigger than the tree most people keep in their living rooms.