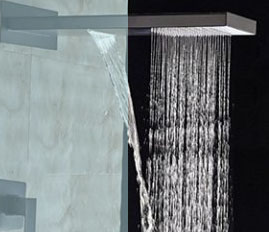 If you are a fan of the rainfall shower, you will definitely want to take a look at the Votamuta LED Color Rainfall shower head. The LED Color feature brings some color to your shower time and an innovative look to your bathroom.

What is a Rainfall shower?

But first, what exactly is a Rainfall shower? The rainfall shower provides you a real rainfall shower experience as if you were truly outside on the rain. Unlikely most regular showers, the rainfall shower is usually installed directly overhead giving you a soft and gentler shower. One of the greatest advantages of rainfall shower heads is that, most of them comes with several water spray options, therefore you can always choose between a soft shower or a strong massage one, all in just one product.

Another advantage is the innovative look a rainfall shower head can bring to your bathroom by just installing a shower. These showers models are normally designed to look very contemporary and minimalist either in rectangular or round models. Just pay attention to its measures since rainfall shower heads tend to be larger than regular showers. Your bathroom will look fantastic in a glimpse.

Imagine now, having an outstanding rainfall shower head combined with a lot of style and technology. It’s Votamuta’s proposal for the LED Color Rainfall shower head. This is a shower that mix the rainfall feature together with LED color sensitive lights to provide you a vibrant shower time.

Mounted on the wall, instead of on the ceiling like most rainfall showers , this model available on Amazon measures around 22 inches and comes with a hand shower hose of 59 inches length to help with your shower tasks. Added to a modern design, the Votamuta LED Color Rainfall shower head comes with an oil rubbed bronze finish and a ceramic valve type.

The LED color power in the Votamuta shower works according to the water flow. Therefore, no batteries will be needed. The colors change according to water’s temperature. Blue for cold water, green for moderate temperature and hot shower and red for burning hot water.

Although this product doesn’t have many reviews on Amazon, all of its functions and features seems to do a good work for a great LED color and rainfall shower experience. It also comes with a warranty assured by Votamuta.

How does a LED color shower work?

You may think having a shower filled with lights running in your bathroom is a dangerous thing, but the possibility of having an electric shoch is almost nill. The power generated by LED color shower heads is very low. They are usually powered by running water that goes through a turbine creating the energy enough to light the color LEDs. Our advise for you is to choose the battery powered showers because, even though the power generated is very low, it can consume much more energy than a regular shower so there is a big risk of having to replace the batteries after few weeks.